A trip to Whitby isn’t complete without...

As they say, a trip to Whitby isn’t complete without a visit to The Magpie Cafe, one of the best known seafood restaurants in the UK, it’s so popular, diners usually form a queue down the street.

In May, the beautiful building, originating from the 1700s suffered two major fires in the space of a weekend and the roof and upper floor were destroyed.

In July, the takeaway was opened to customers, but complex repair and rebuild works have continued into the autumn on the restaurant area.

The Project Management Team, MLS Group asked our engineers to quote for some steel works and we visited the building to find it without a top.

Ian Rutter who has twenty-six years’ experience in engineering steel works can spot potential problems and using the architect’s drawings, investigated the roof space. He found that the wooden trusses in the drawings would not be able to support the weight of the roof and would also remain to be a fire risk. He recommended replacing the wooden trusses with steel, which would not only withstand a blaze but would also be substantial enough to hold up the roof when the heavy concrete tiles were put back into position.

A newly appointed architect re-designed the building and the structural engineer recalculated the stress on the trusses which could be made smaller than the wooden version, as steel is so much stronger.

Mike Lingard-Smith, Project Manager from MLS Group has run the project from the start. He said:

“Issues with the original plans delayed the project considerably and knowing the short time frame, we needed a specialist engineer to advise on the roof. Experts at Stead Engineering were called upon to make recommendations and were so helpful, we commissioned the works to be prepared.”

“Once delivered, the trusses took three days to install by three of their engineers. We craned them in which involved requesting a road closure from the Council. I had arranged for it to be closed for one week, but Stead’s team moved really quickly which meant we only needed it for a day and a half, minimising disruption as much as possible.”

“Following the initial installation, the engineers came back for another three days to make adjustments and secure the trusses into position.”

“The guys at Stead Engineering are very knowledgable and their experience definitely pays. I would say their recommendations have saved the owners of The Magpie from further fire risk and the possible cost of replacement in the future. These steel works will be holding up The Magpie’s roof for hundreds of years to come.”

The Magpie Cafe is due to re-open in a few weeks time. Watch this space for the long-awaited celebrations.

For more information about structural steelworks for commercial, residential and industrial buildings, call us on 01482 236556.

<< Back to Case Studies 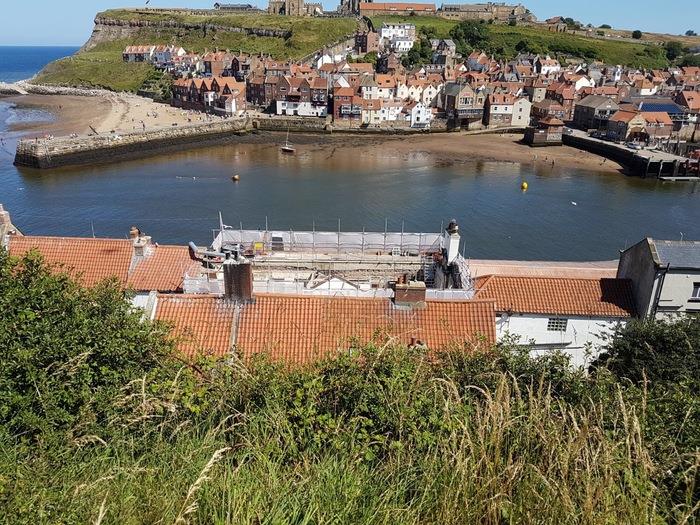